Adams Morey Limited are delighted to announce the acquisition of R&M Commercials Limited Basingstoke from the 19th October 2020.
R&M Commercials began trading in October 2002 with the partners Russell Blackman and Martyn Powell.

Operating from Bell Road in Basingstoke, R&M Commercials Ltd have invested both in premises and in the latest diagnostics and workshop equipment enabling them to provide the best possible level of customer service.

The business offers an MOT Centre for Car, Van, Motorhome, Class 4, 5 and 7. A 24/7 breakdown assistance service with a fleet of eight 3.5t service vans, along with three commercial recovery vehicles covering Hampshire, Berkshire and Southern England. 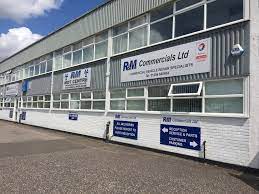 Adams Morey is a part of the Greenhous Group who are listed in the Sunday Times Fast Track, which lists the UK’s top-performing private companies. Adams Morey itself was launched in 1973 and has successfully built an extensive customer base in the truck and van marketplace along the south coast with its company headquarters in Southampton.

Kevin Swinnerton, Managing Director of Adams Morey Limited spoke highly of the R&M management saying: “Russell and Martyn have developed a wonderful independent business which has rightly earned a great deal of respect from its customers for the level of customer service it has delivered. The R&M business will be merged into the Adams Morey portfolio and will operate as Adams Morey Limited representing the DAF franchise. I welcome the R&M staff to our company and look forward to further prosperity in the Basingstoke area working alongside Russell & Martyn”

Russell and Martyn explained “It was not an easy decision to sell the business after so many years, but we do so with complete confidence in Adams Morey to maintain the spirit of service that we have fostered with our customers and staff. Our business continues to evolve, and, in these days of larger organisations, we are sure Adams Morey will look to enhance that spirit to the benefit of customers and staff alike. We wish them all well.”