Today marks the start of the series production of a new generation of trucks at DAF in Eindhoven. The official ‘Job One’ truck – a red XG+ with a 12.9 litre PACCAR MX-13 engine – was presented by John Jorritsma (Mayor of Eindhoven) and Harry Wolters (President of DAF) to André Verbeek, Managing Director and owner of Verbeek Agra Vision DAF is the first truck manufacturer to introduce to the market a completely new generation of trucks that has been developed in line with the new European regulations for truck masses and dimensions.

“DAF is not just the first company to do this but also the only one,” according to DAF president Harry Wolters. “This means that our new trucks for long haulage – the new XF, XG and XG+ – have set a new benchmark for efficiency, safety and driver comfort. These were the main reasons why the European Commission was prepared to give the truck industry literally more room to develop new, optimal cabins. By extending the front by 16 centimetres and paying maximum attention to aerodynamics, we have been able to achieve savings of 10% on fuel consumption and a similar reduction in CO2 emissions.”

All happening at Brainport Eindhoven

The Mayor of Eindhoven, John Jorritsma, revealed his pride at the achievements of ‘his’ city, Eindhoven, the centre of the ‘Brainport Region’. “It’s all happening in Eindhoven. A city of Technology, Design and Knowledge. The fact that today DAF is starting its series production of a new generation of revolutionary trucks – all high-tech products – is all the proof we need.”

The New Generation DAF constitutes a completely new vehicle platform, one that is fully prepared for the alternative battery-electric and hydrogen drivelines of the future that are currently being developed at DAF.

The first truck in the new generation series was delivered to André Verbeek, managing director/owner of the Dutch firm Verbeek Agra Vision, which specialises in the domestic and international transport of poultry and eggs using a fleet of 30 vehicles, 25 of which are DAFs. The milestone XG+ will be driving for its subsidiary company Hennentransport Hooijer. “In addition to unrivalled reliability and the low costs per kilometre, the superb level of driver comfort is also an important reason for our decision to choose DAF,” explains André Verbeek. “And with the new top model XG+, DAF has once again set a new standard. A very important factor in these times of driver shortages.” 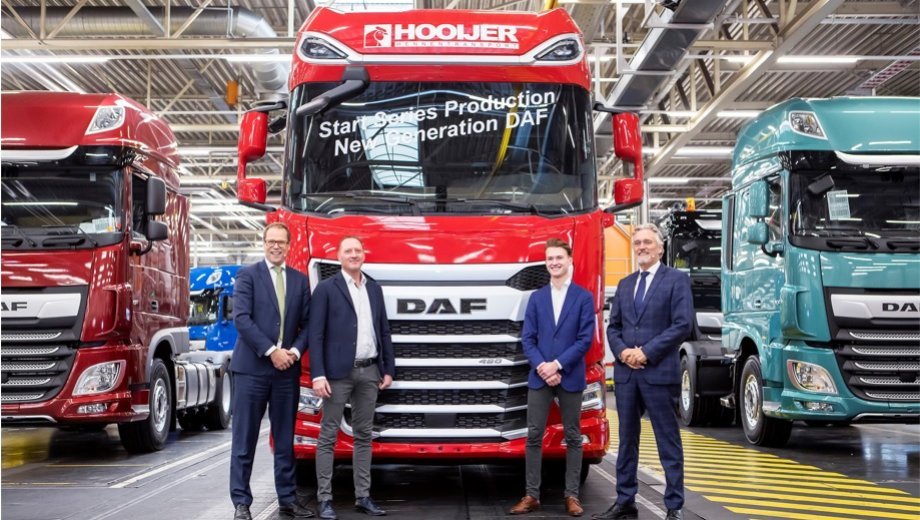